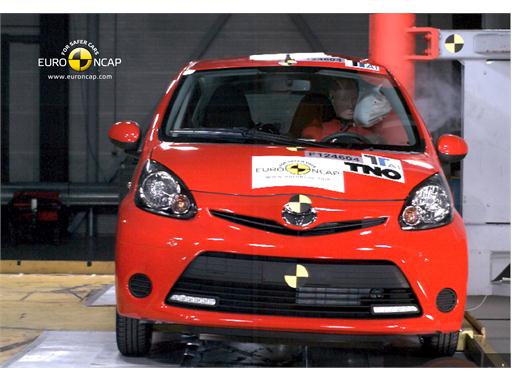 The Toyota Aygo and its twins, the Citroën C1 and Peugeot 107, have achieved 3 stars in Euro NCAP's latest test series. All three cars have been recently facelifted from the previous models tested by Euro NCAP, that achieved four stars adult for occupant protection back in 2005. While the facelifted models are sold as new to the public, it is clear that they have failed to keep abreast of latest safety developments and standards. The current model of Aygo and its twins lack basic items such as side impact airbags and electronic stability control as standard equipment. In response to Euro NCAP's tests, Toyota has made a commitment to make the following items standard by July 2013 in all European countries: side thorax airbag, side head curtain airbag, electronic stability control, passenger seatbelt reminder, ISOFIX and top-tether in rear outboard seats. PSA Peugeot-Citroën has also committed to do the same with its 107 and C1 models. Dr Michiel van Ratingen, Euro NCAP Secretary General says: 'Our test protocols have evolved significantly over the past few years. There are more tests and the requirements have become more stringent. Despite this, many manufacturers have engineered their latest cars to achieve the highest score. On the other hand, we see that some manufacturers continue to offer popular best sellers without making the necessary incremental updates to safety. It is those models that obviously fall behind other, more modern cars competing in the same category.' Available content includes videos and still images.