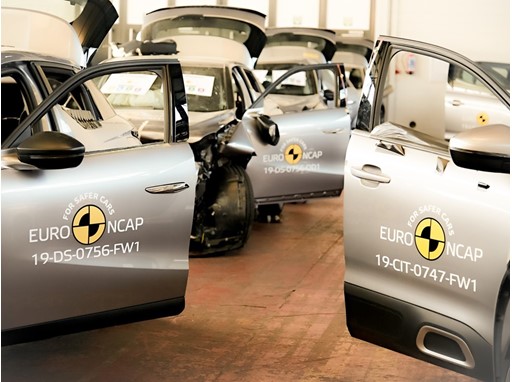 Today, Euro NCAP looks back at 2019, one of its busiest-ever years, and forward to the challenges that will come in the years ahead.  Fifty-five cars were tested last year, representing 26 different makes of car.  Such a high number means that nearly all cars (92 percent) sold in Europe last year carried a valid Euro NCAP rating, giving consumers valuable safety guidance on almost any model they are likely to consider buying.  Only three percent of new cars sold have not been rated by Euro NCAP.
And what do the ratings tell us?  Around 75 percent of the cars tested last year achieved the top five-star safety rating.  To do this against Euro NCAP’s 2019 requirements, they had to be equipped with much of the very latest crash-avoidance technology.  Autonomous Emergency Braking (AEB) for car to car impacts was standard on around 90 percent of cars and optional on a further five percent; AEB to avoid pedestrian collisions was standard-fit on 85 percent of cars; and cyclist-detection, promoted by Euro NCAP only since 2018, was already standard on some 80 percent of the new cars tested.  Add to that high rates of fitment of Speed Assistance and Lane Support systems and today’s cars are safer than ever, thanks to Euro NCAP’s initiatives and the car industry’s willingness to rise to the challenge.
Indeed, Euro NCAP and the European car market are leading the way, with faster adoption of safety equipment compared to many other parts of the world.  As the revised General Safety Regulation (GSR) comes into effect from 2022 onwards, several new safety features will become mandatory.  Last year’s results show that many of these technologies are already widely fitted on passenger cars as a result of Euro NCAP’s demanding requirements over the last few years.
And it does not stop there: 2020 brings in new tests for crash safety and crash avoidance and, for the first time, for post-crash survival, with cars rewarded for features that allow for safe and rapid rescue of occupants.  Euro NCAP will encourage car manufacturers to continue to offer the highest levels of safety to their customers and ensure that consumers can rely on its ratings for the best safety advice.
To find out more about the 2019 Euro NCAP ratings, take a look at the following link:
2019-The Year in Numbers
Editor’s note
For full results, visit www.euroncap.com or Euro NCAP's newsroom for journalists.
For media information, please contact us at media@euroncap.com.
Follow us online and on social media:
Twitter
Facebook
Instagram
YouTube
About Euro NCAP
Euro NCAP organizes crash tests on new vehicles and provides motoring consumers with a realistic and independent assessment of the safety performance of some of the most popular cars sold in Europe. Established in 1997 and backed by several European Governments, motoring, consumer and insurance organizations, Euro NCAP has rapidly become a catalyst for encouraging significant safety improvements to new car design. Visit our website: www.euroncap.com.
Euro NCAP ratings strictly apply to vehicles of the specifications offered in Europe. The ratings do not necessarily apply to models offered in other regions, even when sold under an identical name, as production specification and equipment may vary.