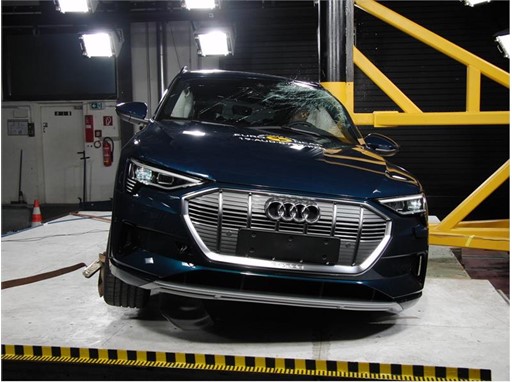 Today, Euro NCAP publishes the safety ratings of seven new vehicles, among which three have made their first appearance this year: Audi’s first fully electric model, the e-tron, Volkswagen T-Roc’s smaller brother the T-Cross and the hybrid Lexus UX.  Euro NCAP also releases the results of the new Mazda 3, the Renault Clio V, and the latest Toyota Corolla and RAV4.  All seven cars achieved the maximum five-star rating against the latest test requirements.
As more and more new energy vehicles are entering on the market, four vehicles of the batch were tested as other than petrol or diesel variants.  Audi’s new 4x4 was assessed as full electric and can be compared to Tesla’s Model 3, due later this year, and Jaguar’s I-Pace and Nissan Leaf tested under the same rating regime in 2018.  The Corolla, the RAV4 and the UX are hybrid vehicles.
Now the Toyota Corolla again, Europe's Auris replacement was tested as sedan and hatchback variants, in cooperation with Euro NCAP’s sister organization Australasian NCAP.  Both variants shared the same full 5-star result.  In the same category, we find the Clio V and its rival the Mazda 3.  Both performed exceptionally well in Adult Occupant Protection and Child Occupant tests, making them strong contestants in our Small Family Car best in class category.
The new VW T-Cross is a small supermini-sized crossover based on the Polo tested in 2017.  While the Polo already offers many safety features, the T-Cross adds a lane support which helps to prevent inadvertent drifting out of lane and intervenes in some more critical situations.
Michiel van Ratingen, Secretary General of Euro NCAP says: “It is encouraging to see that all manufacturers did well, regardless of type of powertrain or class of vehicle tested.  New cars on the market continue to offer more advanced technology as standard, systems that were not even considered an option a few years ago.  Vehicle manufacturers must respond on all levels to consumers expectations, but adding more safety is often challenged by market conditions.  Despite this, we see the latest state of the art safety technology being made standard on many of Europe’s best-selling family cars.”
Editor’s note
For full results, visit www.euroncap.com or Euro NCAP's newsroom for journalists.
For media information, please contact us at media@euroncap.com.
Follow us online and on social media:
Twitter
Facebook
Instagram
YouTube
About Euro NCAP
Euro NCAP organizes crash tests on new vehicles and provides motoring consumers with a realistic and independent assessment of the safety performance of some of the most popular cars sold in Europe. Established in 1997 and backed by several European Governments, motoring, consumer and insurance organizations, Euro NCAP has rapidly become a catalyst for encouraging significant safety improvements to new car design. Visit our website: www.euroncap.com.
Euro NCAP ratings strictly apply to vehicles of the specifications offered in Europe. The ratings do not necessarily apply to models offered in other regions, even when sold under an identical name, as production specification and equipment may vary.