Raising Standards: Renault and Subaru get Top Safety Ratings with AEB across the Board 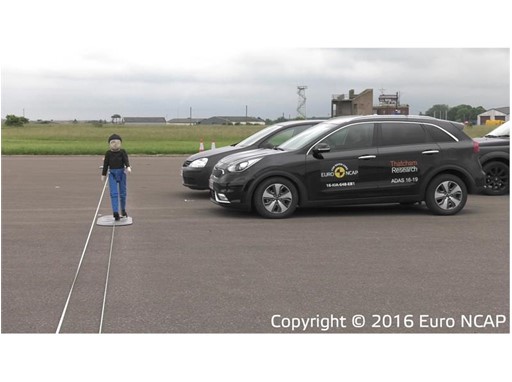 Brussels, 31 August 2016 - The safety ratings of four new cars are published by Euro NCAP today: the Kia Niro, Renault Scenic, Subaru Levorg and the Toyota Hilux.
The Renault Scenic and the Subaru Levorg, both equipped as standard with Autonomous Emergency Braking (AEB), achieved maximum five-star ratings.  Kia and Toyota opted for dual ratings for their cars, with AEB as part of an optional safety pack:  the Kia Niro gets four stars with standard equipment and five with the option pack*; and Toyota’s new Hilux gets a three-star rating with standard equipment and five with the pack**.
The Toyota Hilux and Kia Niro were tested under Euro NCAP’s new ‘Dual Rating’ system, which means that the default rating is based on standard safety equipment available throughout the range. Additional tests are done to determine what the result would be when an optional safety pack is fitted.
Euro NCAP Secretary General, Michiel van Ratingen, said, “It is always good to see safety equipment being fitted as standard, and Renault and Subaru deservedly get top safety ratings for their cars.  The fact that Toyota are making advanced safety technologies available on pickups, even if only an option at this stage, shows that the Dual Rating scheme is a great way to encourage broader fitment of these systems across all types of vehicles.”
Detailed results and crash test pictures of the four cars are published on our website. All videos are available on our YouTube channel and the Newsroom for journalists.
For media requests, please contact media@euroncap.com.
More safety ratings will be released on 28 September 2016.
* “Advanced Driving Assistance Pack”: AEB City, AEB Pedestrian, AEB Inter-Urban
** ”Toyota Safety Sense”: AEB City, AEB Pedestrian, AEB Inter-Urban, Lane Assistance, Speed Assistance