Panda, Wrangler off the Pace in Latest Safety Ratings 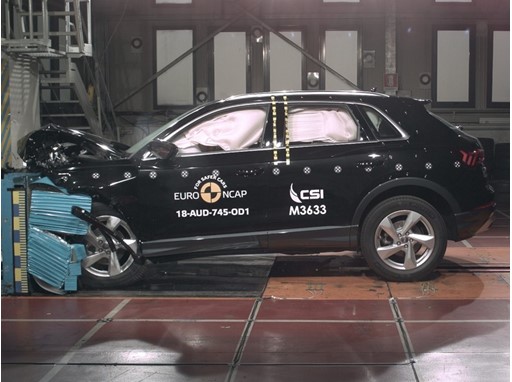 Today, Euro NCAP releases the safety ratings of nine cars.  The Audi Q3, BMW X5, Hyundai Santa Fe, Jaguar I-PACE, Peugeot 508, Volvo V60 and its partner, the S60, all achieve a maximum five-star rating.  However, two FCA vehicles – FIAT’s aging Panda and Jeep’s all-new Wrangler – get zero stars and one star respectively.
The Panda, last tested by Euro NCAP in 2011, has now been comprehensively overtaken by rival superminis in the race for safety.  With nothing more than a seatbelt reminder scoring points in Euro NCAP’s Safety Assist box, the vehicle fails to reach even a single star, a dubious distinction matched only by the Punto in 2017.
In contrast, the four-wheel drive off-road Jeep Wrangler is an all-new vehicle, fresh to the market in 2018.  With a seatbelt reminder and a simple driver-set speed limiter but no other form of driver-assistance system, the Wrangler clears the one-star threshold but lags far behind its competitors.
Michiel van Ratingen said,
“It is truly disappointing to see a brand-new car being put on sale in 2018 with no autonomous braking system and no lane assistance. It is high time we saw a product from the FIAT-Chrysler group offering safety to rival its competitors.”
But even some five-star vehicles had problems.  Euro NCAP’s tests on the Hyundai Santa Fe highlighted an issue where the side curtain airbags of cars equipped with a panoramic roof could be torn during deployment.  In response, Hyundai has already changed the airbag fixings in production and early cars are subject to an official recall.  Owners of such vehicles will be contacted by the manufacturer and should make sure they take their cars to dealers to be re-worked.
The BMW X5 also suffered from airbag problems, the driver knee airbag not deploying correctly in the frontal offset test and providing little additional protection to the driver’s legs.  A similar issue was seen with the 5 Series in 2017.
Michiel van Ratingen, “Despite the work done by manufacturers during the development of their vehicles, Euro NCAP still sees a lack of robustness in some basic areas of safety.  To be fair, the Audi Q3, Jaguar I-PACE, Peugeot 508 and Volvo V60/S60 have set the standard against which others are judged this time, and other manufacturers could do well to follow their example.  The I-PACE, especially, demonstrates that future vehicles will be good for the environment but also provide high levels of safety”.
Editor’s note
For full results, visit www.euroncap.com.
For media information, please contact us at media@euroncap.com.
Follow us online and on social media:
Twitter: @euroncap
Facebook: forsafercars
Instagram: @euroncap_forsafercars
YouTube: EuroncapCom
About Euro NCAP
Euro NCAP organizes crash tests on new vehicles and provides motoring consumers with a realistic and independent assessment of the safety performance of some of the most popular cars sold in Europe. Established in 1997 and backed by several European Governments, motoring, consumer and insurance organizations, Euro NCAP has rapidly become a catalyst for encouraging significant safety improvements to new car design. Visit our website: www.euroncap.com.
Euro NCAP ratings strictly apply to vehicles of the specifications offered in Europe. The ratings do not necessarily apply to models offered in other regions, even when sold under an identical name, as production specification and equipment may vary.