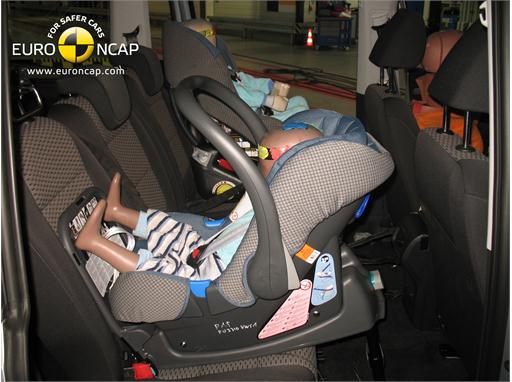 Euro NCAP releases the crash test results for fourteen cars, including the first Chinese-manufactured vehicle. Euro NCAP's other top scorers with five star results are the Audi A1, the BMW Mini Countryman, the Ford C-MAX and Ford Grand C-MAX, the Kia Sportage, the Opel/Vauxhall Meriva, the new Seat Alhambra, the MPV VW Sharan and the face lifted VW Passat. The Kia Venga, reassessed shortly after its market introduction, has also been awarded with a five star result. The Nissan Micra, the Volkswagen Amarok and the Jaguar XF were all rewarded with four stars. After an unsuccessful first introduction onto the European market in 2005, Landwind returns with the CV9, a mid-sized MPV that achieved two stars in Euro NCAP's assessment. Eager to erase its poor safety record, Landwind hopes to make a strong comeback with the CV9 which, according to the Chinese carmaker, has been revamped to meet the strictest European safety standards. Available multimedia package includes car crash tests for the different cars tested, as well as still images.