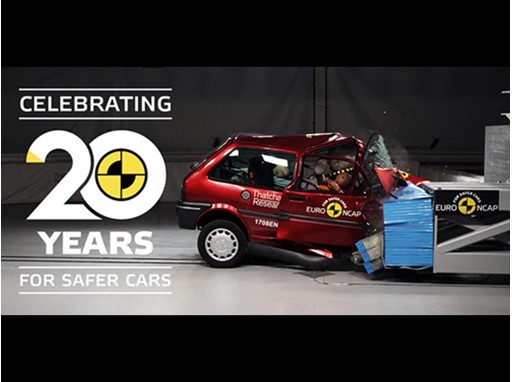 MORE than 78,000 lives (1) have been saved since Euro NCAP’s tough crash safety tests were launched 20 years ago this week. Today, Euro NCAP reveals it has published over 630 safety ratings, crash-tested some 1,800 cars and collectively spent over 160 million Euro (2) to make cars safer.
The first tests exposed safety failings in top-selling family cars, forcing a fundamental rethink in the way vehicles were designed to prevent accidents and save lives. Twenty years on, 9 out of 10 cars sold on the European market hold a Euro NCAP rating and the motor industry actively supports the development of new requirements for the top safety ratings.
Today, the results of crash tests (4) of two family cars built 20 years apart underline the huge advances in vehicle safety since 1997. Safety technologies that were non-existent or optional at most - such as driver and passenger airbags, side protection airbags, belt reminders and electronic stability control – are now standard on all cars sold in Europe.
“We are very proud - as we mark 20 years at the forefront of road safety – that Euro NCAP’s programme of safety tests has achieved major, life-saving improvements in cars and has helped Europe reach the lowest road fatality rate for any region in the world (3).” said Secretary General, Michiel van Ratingen.
“Euro NCAP has given millions of consumers the knowledge and confidence to choose the safest cars possible. Recent years have shown a slowdown in the progress rate, however, so we mustn’t take our foot off the gas. We want to ensure that Europe’s roads get even safer in the next 20 years, not just for car occupants but for all participants in traffic.  We already test many more aspects of a car’s safety than we did when we started in 1997, and that is set to continue. Next year, we will test systems that recognise and avoid crashes with cyclists, and we’re lining up a very challenging roadmap for 2020 to 2025.”
Backed by the FIA (Federation Internationale de l’Automobile), ICRT (formerly named International Testing), the UK and Swedish Governments, the first Euro NCAP crash test results were revealed on 4th February 1997. Until then, car makers only had to meet basic legislative crash test requirements for new cars, the results of which were not published. It was impossible for consumers to compare the safety of one car with another.
Euro NCAP’s programme was the first time that realistic, like-for-like tests had been conducted in Europe by independent experts, and the results sparked outrage from consumer groups, members of the public and the media.
In the first round of tests, of seven popular ‘supermini’ sized cars, the Ford Fiesta and Volkswagen Polo each achieved three stars out of the then-maximum of four, based on protection levels offered to adult occupants.
The top-selling Rover 100 achieved only one star while the Fiat Punto, Nissan Micra, Vauxhall/Open Corsa and Renault Clio achieved only two stars. When pedestrian protection was assessed, not one vehicle scored more than two points, suggesting manufacturers were not designing cars with vulnerable road users in mind.
Leading car manufacturers attacked the tests, claiming they were so severe that it was ‘impossible’ for a car to achieve four stars. Five months later, however, Volvo’s S40 became the first four-star car for occupant protection.
Max Mosley, the first Chairman of Euro NCAP and Chairman of Global NCAP said: “Twenty years on from what started as a controversial programme, rejected by manufacturers, and supposedly aiming for unrealistic safety standards, Euro NCAP is now firmly part of the automotive mainstream.  Thousands of fatalities have been prevented, consumer demand for safety is high, manufacturers compete on safety rating results, and vehicle safety standards continue to improve.”
“The consumer awareness model deployed so effectively by Euro NCAP has not just fundamentally changed the European market, it has helped to catalyse other NCAPs across the world in middle and low income countries. Consumer pressure informed by crash tests is helping to make rapid changes in levels of safety in India, Latin America and the ASEAN region.  Euro NCAP has truly had a global impact, a proud road safety legacy that has saved countless lives.”
Euro NCAP President and Thatcham Chief Technical Officer, Andrew Miller: “The impact of these tests cannot be overstated. Until Euro NCAP, consumers only had the manufacturers’ word for it. Now we have the safest cars ever and the safety levels of each car are there for all to see. This success could only be achieved by actively working together in Europe under one umbrella and by continuing to invest in better safety.”
Euro NCAP tests have become ever more demanding and cars can now achieve a maximum of five stars, awarded not just for how they protect occupants and pedestrians in a collision, but on the car’s ability to avoid a crash in the first place. The tests represent real-life accident scenarios that could result in the death or injury. Top achievers must demonstrate that their cars are fitted as standard with technology that avoids or mitigates such crashes and, where a crash is not avoidable, adequate protection is offered to car occupants and other road users.
"Euro NCAP has been the driving force behind improvements in vehicle safety in Europe for two decades. In an age of increasing automation and technological change, the role of independent testing will become even more important. We hope the organisation will remain at the forefront of vehicle safety for many years to come." said Antonio Avenoso, Executive Director of the European Transport Safety Council.
For media information, please contact us at media@euroncap.com.
Editors notes