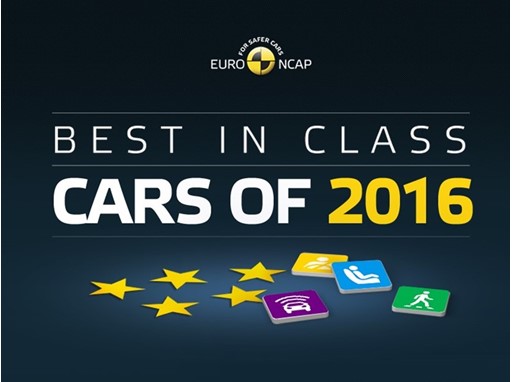 Brussels, 14 December 2016 - In 2016, Euro NCAP tested 18 new passenger cars and four heavy quadricycles and today announces some of the year’s highlights.  Three cars are awarded ‘Best in Class’: the Toyota Prius in the ‘Large Family Car’ category; the Hyundai Ioniq in the ‘Small Family Car’ category; and the VW Tiguan is the best ‘Small Off-Roader’ of 2016*.
2016 saw the introduction of some significant changes to Euro NCAP’s ratings scheme.  The inclusion of tests for pedestrian-detecting autobrake systems drove a huge increase in fitment of this life-saving technology, mostly as standard equipment but also as an option. The Toyota Prius, winner in the Large Family Car category, was the first car to undergo tests of its AEB Pedestrian technology. Its standard-fitted safety pack, ‘Toyota Safety Sense’, performed well and managed to recognise and avoid or mitigate potential crashes with pedestrians.  The excellent performance of the SEAT Ateca in these tests was also noted.
While ‘Best in Class’ is based only on cars with standard safety equipment, several car manufacturers took advantage of Euro NCAP’s new ‘dual rating’ system in 2016.  In addition to a star rating indicating the safety of a car with only standard safety equipment, a second rating demonstrates the benefits of optional safety equipment.  In general, the optional ‘safety pack’ includes AEB, including pedestrian-detecting auto-brake systems, and the scheme was used for Superminis, Small Family Cars and one Pickup – competitive segments that might well otherwise have missed out on advanced driver assistance technologies.is a great way to encourage broader fitment of these systems across all types of vehicles.”
Euro NCAP’s Secretary General, Michiel van Ratingen said, “Some technologies are expensive and we recognised that it may not be possible for manufacturers to include them as standard equipment across the range and, at the same time, keep basic variants affordable for the target market.  The dual rating scheme lets them phase in sales more gradually, keeping cars affordable but, at the same time, giving consumers the chance to take advantage of these important safety technologies. We’re pleased to see such a broad uptake of pedestrian-detecting AEB systems in 2016, as standard or as an option."
The Mercedes-Benz E-Class performed well but was the only car tested in the ‘Executive Car’ category so cannot be awarded ‘Best in Class’. In a year that underlined Euro NCAP’s influence, the E-Class was also noted for its exceptional performance in child occupant protection. With an automatic passenger airbag disabling system and excellent dynamic test results, it is clear that Daimler has invested greatly in an area of assessment recently made more demanding by Euro NCAP.
Detailed results and crash test pictures of all rewarded cars are published on our website. Videos are available on our YouTube channel and Newsroom for journalists. For media information, please contact us at media@euroncap.com.
*Euro NCAP follows vehicle manufacturers’ recommendations regarding vehicle classification, based on mass, dimensions and body style.  There may be an overlap between vehicle categories