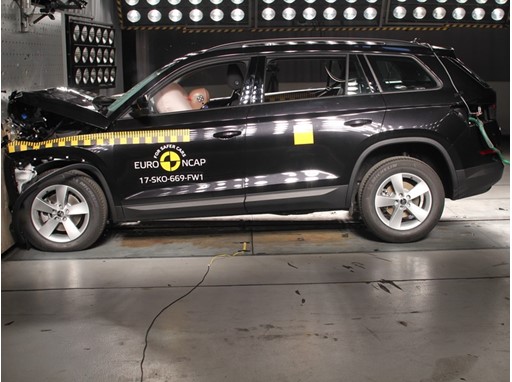 Today, Euro NCAP releases the results of four new cars.  The MINI Countryman and Škoda Kodiaq are both awarded a five-star rating.  Nissan’s new Micra gets four stars with standard equipment and five stars with the optional safety pack[1].  The Suzuki Swift is rated as three stars as standard and four stars with the optional safety equipment.
All cars reach the five star levels for adult occupant protection, child protection and pedestrian protection.  The differences come in the fitment of advanced driver assistance systems.  The Škoda Kodiaq is equipped as standard with an AEB system that detects pedestrians as well as other cars.  The Kodiaq’s five-star rating continues Škoda’s recent good form: all recently tested Škodas have been rated as five stars.  The MINI has AEB car-to-car as standard and pedestrian detection as an option.  Nissan put AEB pedestrian and lane assistance in the option pack (‘Euro NCAP 5* Pack’) of the Micra, nudging the four-star rating with standard equipment into five-star territory with the option pack fitted.  Only the Suzuki Swift does not offer AEB pedestrian, with AEB car-to-car in its ‘Radar Brake Support’ option pack.
Euro NCAP Secretary General, Michiel van Ratingen, said, “Euro NCAP started rewarding AEB pedestrian systems last year and we have seen a rapid uptake of the technology.   We hope to see as fast an adoption of AEB systems that detect cyclists when tests of those systems form part of the rating next year.  For twenty years, Euro NCAP has been pushing manufacturers to fit new and better safety technologies: originally, such things as airbags and pre-tensioners and, nowadays, advanced driver assistance systems that will form the building blocks for the automated vehicles of tomorrow.”
[1] Cars’ ratings are based on a vehicle with safety equipment which is standard across the whole model range.  Euro NCAP allows manufacturers to have a second rating for a vehicle, indicating the safety offered with additional equipment sold as part of an option pack.  To qualify, manufacturers must commit to selling at least 25 percent of cars fitted with the option pack in the first three years, and 55 percent of sales in the following three years.