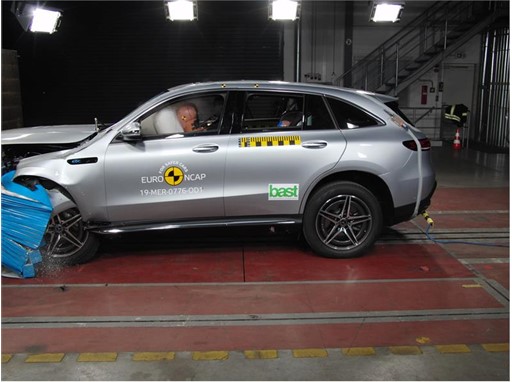 Today, Euro NCAP releases the safety ratings of seven car models: Mercedes-Benz’s first electric off-road, the EQC, and their second generation CLA; Škoda’s high-riding Kamiq; the fourth generation SsangYong Korando; BMW’s latest Z4 and the new Audi A1.  In addition, the Ford Focus, already tested in 2018, has been reassessed following minor updates to car. All seven cars achieved five-star ratings.
SUVs and crossovers continue to soar in Europe, attracting new entrants from around the world.  The C-segment SUV Korando is the first five-star car from Korea's up-and-coming SsangYong.  Well-equipped, and with AEB as standard, the Korando’s rating brings it into line with its competitors.
The Volkswagen Group launched the Škoda Kamiq, sister of the Seat Arona and Volkswagen T-Cross.  The Škoda Kamiq is a high-riding Scala and shares a five-star rating and similar results to the car tested earlier this year.
Mercedes-Benz enters the all-electric market with the fully-electric compact luxury SUV EQC.  This is the first of Daimler’s EQ range, and its rating augers well, with a five-star rating and good all-round performance.  The EQC is part of a growing trend towards battery electric vehicles and joins Jaguar’s I-Pace and Audi’s e-tron amongst the cars that Euro NCAP has tested, and Tesla’s Model X, which will be assessed later this year.
Good results were achieved by other newcomers as well.  The latest Mercedes-Benz CLA achieved an outstanding outcome, scoring more than 90 percent in three of the four area of safety assessed by Euro NCAP.  BMW’s two-seater roadster, the new Z4, scored well all-round but its protection of vulnerable road users was especially impressive, thanks to an active bonnet that lifts when a pedestrian has been hit.  Audi's alternative to the Mini, the A1, also performed well in safety tests.  A five-star car in 2010, the second-generation small hatchback repeats its top rating against Euro NCAP’s newest test requirements, thanks in part to ‘Audi Pre Sense Front’, its standard-fit AEB system.
Finally, the Ford Focus achieved five stars in 2018 but its marginal front-seat whiplash protection meant it could not capitalise on good results for its AEB system.  Ford has improved the design of the seats and head restraints and the car now demonstrates good whiplash protection in rear-end collisions and is rewarded for its excellent AEB city performance.  The outcome is an improved overall score that reaffirms that the Focus is an all-round family car with great safety credentials.
Euro NCAP Secretary General, Michiel van Ratingen, says, “It’s great to see this continued commitment to improved safety.  From these results, achieving 5 stars may look so easy, but to meet test and fitment requirements for technology are very demanding and always updated to incorporate the latest technology development and address priorities in road safety.  Next year will see another step-change in our rating requirements but our experience shows that manufacturers will be keen to maintain the high standards they have achieved so far, and that European consumers will continue to be well served.”
Editor’s note
For full results, visit www.euroncap.com or Euro NCAP's newsroom for journalists.
For media information, please contact us at media@euroncap.com.
Follow us online and on social media:
Twitter
Facebook
Instagram
YouTube
About Euro NCAP
Euro NCAP organizes crash tests on new vehicles and provides motoring consumers with a realistic and independent assessment of the safety performance of some of the most popular cars sold in Europe. Established in 1997 and backed by several European Governments, motoring, consumer and insurance organizations, Euro NCAP has rapidly become a catalyst for encouraging significant safety improvements to new car design. Visit our website: www.euroncap.com.
Euro NCAP ratings strictly apply to vehicles of the specifications offered in Europe. The ratings do not necessarily apply to models offered in other regions, even when sold under an identical name, as production specification and equipment may vary.